Testing microservices is a fundamental task in a microservice oriented system and containerization offers a great opportunity for automating it. Containers can be created and connected on demand, thus they provide the perfect environment where performing tests because it can be created and then destroyed when the tests are terminated. Moreover, we could create a testing environment system which is the exact copy of the production one.

In my previous post I showed Jocker, a Jolie component able to interact with Docker by offering a subset of its functionalities as Jolie operations instead of REST ones. In this post I am going to exploit Jocker for automatizing a test on a simple Jolie microservice by orchestrating it from another jolie orchestrator. In order to do that I will use a simple example you can find in the jocker git repo under the folder: ExampleOrchestrator/TestingDBSystem

You can find the code of this simple Jolie microservice here. As you can see, this microservice has only one RequestResponse operation called getContent which is in charge to select the field of a row (field2) from table testTable of the DB depending on the value of column field1. Very simple.

Orchestrating the Test
Now, I'll show you how to test the microservice by checking if it properly returns the correct responses when some request messages are sent. In order to do so I use this simple orchestrator for interacting with Jocker which executes all the actions I need. In particular, the orchestrator performs three main activities:
Preparation of the testing environment
The main idea is to prepare the testing environment by creating a container for each basic component of the system. Here we have two basic components: the PostgreSQL database and the Jolie microservice.

The PostgreSQL Database container is obtained in the following way:
Steps 4 and 5 could be skipped if we consider to already have a postgresql test image with a pre-installed database initialized with the required data.

On the other hand, the Jolie microservice image can be built by following the same steps explained here. In particular:

The final environment is a system like the following one where the two basic components are now encapsulated within two different containers:

Test execution
The test execution is a very simple phase because the orchestrator just sends all the requests I want to test to the microservice inputPort and checks if the results are like expected. For the sake of this example there is only one request to test but, clearly, they can be hundreds depending on the operations to test and the variety of data to be considered.

Removal of the testing environment
When the test is done, I don't need the test environment any more and I can destroy it. In particular:

Conclusions
I hope this post could be of inspirations for all those software engineers who are addressing testing issues with microservices and containers. Let me know if you have questions or doubts. 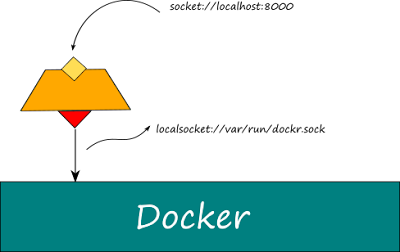 What is a microservice? (from a linguistic point of view)

A service is the single unit of programmable software
In the last years the concept of service has been investigated in the area of Service Oriented Computing and several definitions have been provided for defining service contracts, service providers, service discovery and so on. All these definitions are quite abstract because services have been conceived to be technology agnostic both in the case of SOA and microservices. Such a fact means that it is possible to develop a service in any given technology. They say that services are technology agnostic.

Technology agnosticism is a very important feature which allows us to engineer a software system independently from any technology lock-in. But our purpose here is to give the definition of a service as a single unit of programmable software which cannot be fragmented in sub-parts. For this reason, you will find that all the definitions I am going to provide here are strongly related to a specific technology: Jolie. If you like to see how we chose to model the service oriented programming paradigm in a single language you can continue to read, otherwise you can skip this post. If we are wrong, or we are missing some points, or you know other technologies which match the definitions please write us your feedbacks. We are very exited to share ideas on this open topic.

As a starting point, let me explain the first assumption we made in the linguistic paradigm: the service is the single unit of programmable software. Usually, a service is always obtained by programming a server (it is not important if it is simple or not) joint with some business logic which represent the functionalities to serve:

In a linguistic paradigm such an equation is not more valid just because servers do not exist. Only services exist. It is not possible to program a server because you can program only services. So, forget servers (do not confuse with serverless, it is a different approach). So, if there are no servers but only services, what is a service? As it happens for Object Orientation where classes are logical definitions and objects are the instances of classes in a running environment, let me call the logical definition of services with the term service and its running instance with the term microservice.

For each service there could be more than one microservices, but each microservice is just the running instance of a service. The service is the single unit of programmable software. In the following I am going to build the definition of a service by giving some qualities it has to provide. At the end of this post I'll give the definition of service.

Services exchange messages
The only way for exchanging data among services are messages. There are no other way. A message is just a limited portion of data transmitted in a limited portion of time. A service can both receive messages and send messages. In a SOA a service which receives and sends messages is usually called orchestrator. Such a difference in the linguistic paradigm does not exist, an orchestrator is just a service. In particular, in Jolie message exchange is enabled by means of ports. Messages are received by means of inputPorts and they are sent by means of outputPorts. Similar constructs are used in WS-BPEL, they are called partnerLinkTypes.

Divergent operations are deprecated in Jolie.

if we concurrently send three request messages with content "1", "2", "3", we will receive three related reply messages with the same content.


A definition of service

Here I try to summarize a definition of service starting from the basic concepts highlighted above. Jolie provides more linguistic elements w.r.t. those highlighted here. Maybe more basic concepts could be added to the definition and other should be removed. This is just a starting point for trying to investigate microservices from a linguistic point of view. All the contributions are encouraged!

A service is a unit of programmable software able to exchange messages with other services whose behaviour is triggered by incoming messages and it is defined by a set of finite computation logics called operations which are declared within a machine readable interface. A running instance of a service is called microservice whose inner instances of triggered operations are called sessions. Sessions are executed independently and their variables are independently scoped.